European Patent Office (EPO) opposition procedure comprises two parts: opposition division (first instance), and, if relevant, appeal. A typical procedure is set out on the attached flow chart. It is also possible to petition the Enlarged Board of Appeal for review of the appeal decision under certain very limited circumstances. There are some fixed time limits in the overall procedure, such as the deadline for filing an opposition and an appeal. However, there is also some flexibility in the procedure. The EPO announced in June 2016 that it aims to issue first instance decisions on “straightforward” oppositions within 15 months. Typical appeal proceedings take at least two to four years.

The term for filing an opposition is nine months from publication of the mention of grant of the European patent (grant date). Once the opposition term has expired an opponent cannot file new facts and evidence in support of the opposition except under special circumstances. It is therefore advantageous, if at all possible, to include all potentially relevant material in the initial opposition statement.

Assuming that the opposition meets the formal requirements, the patentee is invited to file a response within a four month term. Extensions of time are only available in “exceptional circumstances with duly substantiated requests”. Obtaining extensions of time is thus expected to be difficult. We therefore recommend treating the four month term as the final deadline.

The patentee can submit arguments and evidence in response to the opposition and can file amended claims. It is possible for the patentee to file several sets of claims for consideration by the opposition division. Thus, a broad claim set can be filed as a “main request”, and narrower claims can be filed as “auxiliary requests”, for consideration in the event that the claims of the main request are found to be unallowable.

The EPO has stated that (a) the date of oral proceedings will, as a rule, not be earlier than six months after dispatch of the summons, (b) the summons to oral proceedings will set out the preliminary opinion of the opposition division on the issues raised, and (c) the deadline for the parties to file any final written submissions will normally be two months before the date of the oral proceedings. Depending on views expressed by the opposition division at this stage, it may be appropriate to file further written submissions and, in the case of the patentee, one or more sets of amended claims.

At the oral proceedings, the patentee and the opponent(s) argue their respective cases. The patentee’s claim requests will be considered in order until a request is found to be allowable or no requests remain. A decision is given verbally at the end of the oral proceedings.  The decision will be that the patent is revoked, that it is upheld as granted or that it is upheld in an amended form. No reasons (or very brief reasons), are given with the verbal decision.

In some cases, it is possible for the patentee to file new claim sets during the oral proceedings itself. However, this is permitted strictly at the discretion of the opposition division.

2 Responding to the Appeal

The appeal procedure is similar to the opposition division procedure. The respondent to the appeal is invited to file a full response within a four month term. It is not usually possible to obtain any extension. The response must set out the respondent’s case in full and, if the respondent is the patentee, then this may be the last opportunity to file amended sets of claims (i.e. auxiliary requests).

The rules of procedure of the Boards of Appeal stress that a party’s full case, including all facts, evidence and arguments, should be included in either the grounds of appeal, or the reply in the case of a respondent. For a patentee, this also means that any claim amendments should be filed with the grounds of appeal or reply. Any further submissions which include new facts, evidence, arguments or claim requests are in principle considered to be an amendment to a party’s case and are admitted into proceedings only at the discretion of the Board of Appeal, and if reasons justifying the late submission are provided.

These rules are usually followed strictly by the Boards of Appeal. Occasionally, it may be possible for new material, or new sets of claims, to be introduced during the course of an appeal, for example if the issues are straightforward and are in answer to a matter which has been recently raised for the first time in the proceedings. In general, however, it should be assumed that the appeal will be based only on the submissions made in the grounds of appeal and any reply to the grounds.

Once the summons has issued, the ability to introduce new arguments into the appeal is very restricted. In principle, the Boards will not take into account any amendment to a party’s case which is filed after a summons to oral proceedings has been issued. Exceptional reasons will therefore need to be presented if a party wishes to introduce new evidence, file any new claim requests, or make any new arguments at this stage.

The Board of Appeal also has the power under Article 112(1) EPC to refer a legal question to the Enlarged Board of Appeal that may be necessary to ensure uniform application of the law, or where a point of law of fundamental importance has arisen.  However, this occurs only in rare cases.

A written decision will issue, typically from two to nine months after the oral proceedings, though occasionally it takes longer.  This decision is not appealable. It may, however, be subject to a petition for review by the Enlarged Board of Appeal under the specific limited circumstances outlined below.

Petition for Review by Enlarged Board of Appeal

Under Article 112a EPC, any party to an appeal who is adversely affected by the decision of the Board of Appeal may file a petition for review of the decision by the Enlarged Board of Appeal. However, a petition may only be filed on very specific grounds and should not therefore be regarded as a final tier of appeal. The specific grounds are that:

If a petition is successful, the appeal proceedings will be reopened before the Board of Appeal.

The procedure is available in respect of all Board of Appeal decisions that have been taken since 13 December 2007. Although a number of petitions are filed each year, it is very rare for appeal proceedings to be reopened.

Further Steps when Patent is Upheld in Amended Form

If the opposition division decides to uphold the patent in amended form and no appeal is filed, or if the Board of Appeal decides to maintain the patent in amended form, a communication issues inviting the patentee to pay a printing fee and file translations of the amended claims into French and German. Once that has been done, the patent is republished as a B2 publication. To make the patent effective in the various EPC countries, the patentee then re-validates the amended patent in the countries that have been designated in the patent and in which the original patent was validated. This means that translations of the amended patent must be filed as necessary with the national patent offices in those countries. 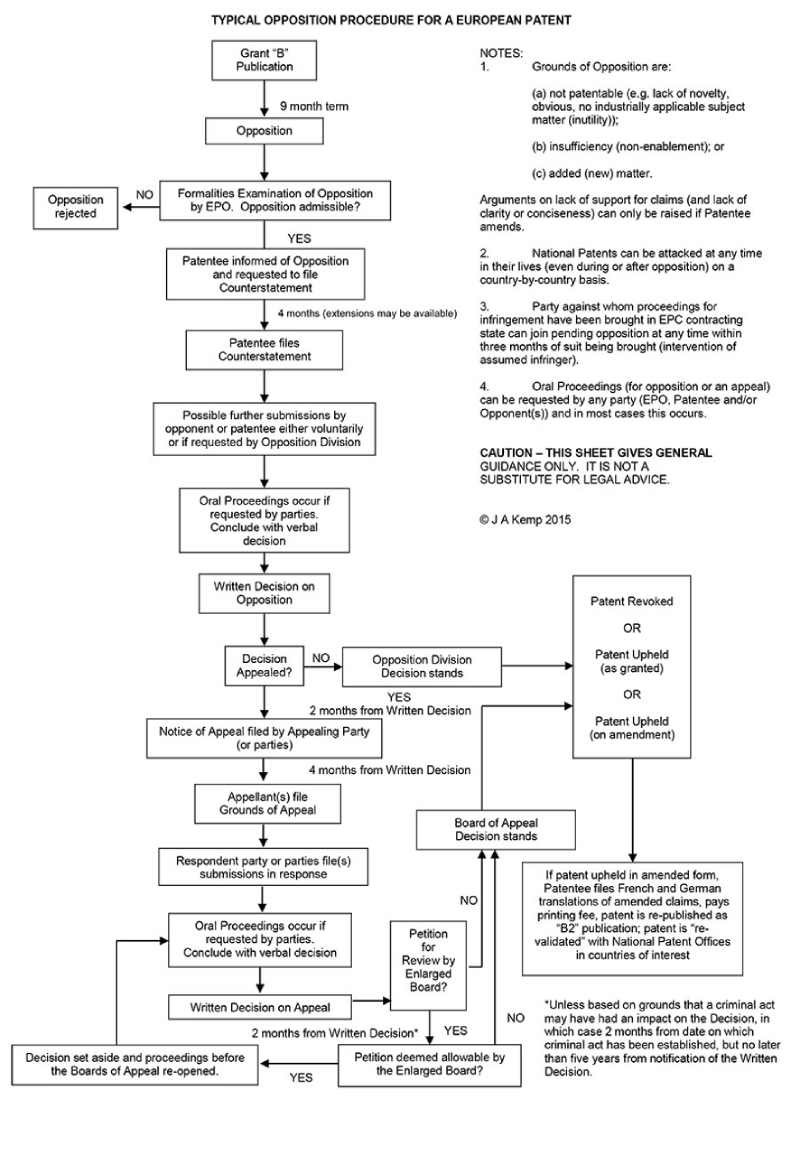 29 September 2022 topical Opting out of the Unified Patent Court The opening of the Unified Patent Court (UPC) is, at the time of writing, expected to take place in early 2023. The UPC will have exclusive jurisdiction over Unitary Patents, and eventually also over national validations of European patents in the states participating in the UPC. That represents a significant change to the current system, under which validity and infringement... Read more
27 June 2022 topical What Happens if I Miss the Deadline for Requesting a Unitary Patent? The Unitary Patent (UP) will probably be introduced in 2023. After this point, applicants for European Patents will be able to decide whether the European Patent should become a Unitary Patent for those countries participating in the UPC or whether to proceed with individual national validations of the European Patent in all or some of those countries. For countries not... Read more
7 April 2022 general Conducting Oral Proceedings at the European Patent Office by Videoconference The European Patent Office (EPO) uses oral proceedings as a means to bring pre-grant examination and post-grant opposition proceedings to a close. Oral proceedings will be appointed when the EPO considers it expedient to discuss outstanding issues face to face and/or at the request of any party to the proceedings. Consequently, the majority of EPO oppositions conclude with oral proceedings.... Read more
Your choice regarding cookies on this site